I'm finally back in the battle seat. Sorry, for the delay which was longer than I anticipated. So just to remind myself, I'd rolled an 11 for the Crusader's command points and used 3 of them.


Seeing that their opponents are shaken, the surviving pilgrim horde pressed on their attack (the riders are already disordered so this could be risky for them - another disorder and they are eliminated) and succeeds in wiping them out (another natural 1!).
Suddenly the Orcs' left flank is looking a little dodgy. The Crusader's crossbowmen fire into the remaining ranks of riders but have little effect (I aimed, using two dice instead of one and while one did hit, it was the riders' turn to get a 1). Then finally the knights move in and hit the riders in the flank (that required a double move using up the final command points), causing them to be disordered but holding on.

Encouraged by the limited success the abbot and his brothers in faith move closer to their troops, urging them to press on for the sake of the poor wayward souls of the orcs.
Turn 4

Oh no, the tides have indeed turned! The orc chieftain is shaken by the attack on his left and hesitates. What should he do? For a moment the entire orc armed seemed at a loss.


I considered going for the default command points of 4 but, looking at that left flank and the fact that one units of the riders were disordered and needed to rally, I decided to go for danger and scored a 1. The riders couldn't even rally (that needed to points)
Seeing their brothers in danger and snarling at their leader's inaction, one of the other units of riders on the left flank decides to charge into the side of the knights and fortunately made it, saving the disordered riders and perhaps the day. Caught unaware the knights are thrown into disarray and slaughtered (another natural 1!) Surely, that is the end for the Crusader's adventures for this season.
Saddened by the loss of those worthy horseman, Abbot Crispin stills believes that he needs to continue. After all perseverance is a noble quality. I rolled one command dice to see if the crusaders would break but not yet - no 1 rolled that time. Two dice next turn if they make it that far. Then I rolled an 8 for actual command points for this turn.

"Come on, my Braves! "shouts Brother Germaline from behind the protection of the crossbowmen. "Remember god is on the side of the just and merciful. Slaughter them!"
The pilgrims do not need to hear any more and charge into the disordered riders and defeat them. Another natural 1 (are theses dice loaded?).
The crossbowmen move up alongside the pilgrims, take aim and shoot but again fail to have any tangible effect the other unit of riders.
Meanwhile the crossbowmen on the other flank advance and fire at the surviving riders and have more success, forcing them into disorder. 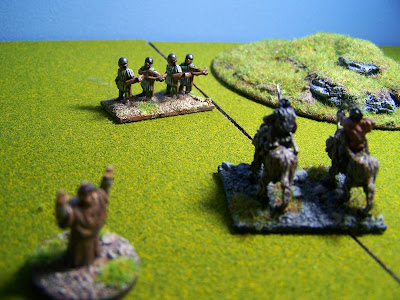 Turn 5
The orcs look to the chieftain, who has cleared his head and urges his men on. I'm definitely going for the default this time!

One unit of riders on the left flank charge the crossbowmen while the others seek to make contact with the pilgrims. Finally the brave troop of happy pilgrims cave in and go to meet their maker while the crossbowmen are disordered.
On the other flank the remaining riders stay still disordered while the chieftain orders a general advance to his nobles and the trollkin. 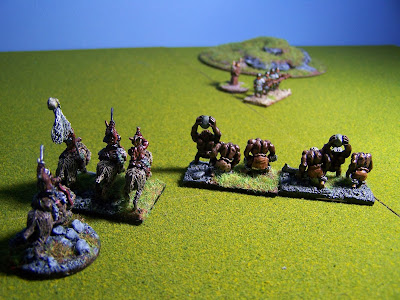 The abbot still wants to fight on (two dice thrown and still no 1). Even the brothers are beginning to question his sanity.

10 command points this turn. The two remaining units could practically do a lap around the battlefield with that many points between them! :)
Brother Equile orders his crossbowmen on the crusader left flank to finish off the riders and finish them off they do (with another natural 1) so they turn and fire into the advancing trollkin but, rushing to get the second shot off, their bolts fail to hit their targets.
On the other flank, Brother Germaline urges the crossbowmen to fight off the riders but to no avail (another natural 1, this time for the riders).

Three command points left and time for a bit of realism..
In a fit of conscience and disobedience which will no doubt require many months of penitence, Brother Equile decides to order the one remaining unit of crossbow to return to their homes, leaving Brother Germaline and the Abbot to practice the art of apologetics with the remaining orcs.

Well, I enjoyed that. I'll post again soon with my thoughts on Mayhem.
Posted by capthugeca at Saturday, November 16, 2013