Well, I've had a good read of Bombshell Games' "Mayhem" fantasy mass battle wargame rules and I have to say that I do like the look of them. They just give that little bit more opportunity than "Hordes of the Things" and "Rally Round the King" to tinker with your units so that you can create the type of troops exactly as you imagine. And thankfully Mayhem, while suggesting base-sizes, allows you to use units as already based for other games (both HoTT and RRtK use bases with 40mm frontages for 15mm figures).

The one problem is that both Mayhem and RRtK require heroes, generals and sorcerers to be based individually and preferably on round bases.

Queue a fortunate find on eBay:- 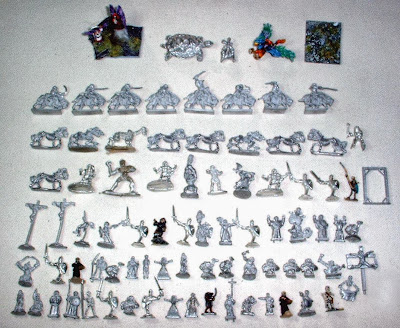 There's enough individual figures here to create a number of characters for several of my armies as well as bolster up a couple of them (RRtK needs more units than the average HoTT one).

And I've sold off my 15mm scifi stuff also thanks to eBay so I have some "pocket money" to fill the gaps in my armies' leadership. And I've got a few days annual coming up so hopefully I'll get some painting done too. Who knows...I might even get a game!!!!

Still in the Land of the Living

Like so many others, I been failing to keep up this blog. Sorry for that.

But I have been doing some painting, modelling and reading though sadly no gaming for quite some time.

In fact the only game I've played is a try out of the "Pulp Alley" Rules with some British Bobbies seeking to foil the plans of an evil cult. I know that a of people are raving about the rules but they didn't really work for me. I think that I am going to revert to using Two Hour Wargames' "Larger than Life" though I might take some ideas from other rules to flesh them out a bit. 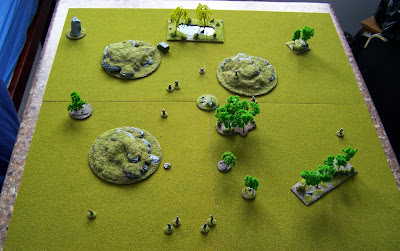 Painting-wise, I have been gradually dealing with my lead mountain of 10mm fantasy and pulp and the three Pendraken resin ruins that I bought at Colours 2011. They paint up really well and give me a more urban setting for pulp games. And I almost forgot that I also painted most of a 15mm Hobbit Army for HoTT (I'll add some pictures to my gallery soon). I have only had the figures for about a decade so not bad, huh! I just need to paint up a few rangers and convert a barrel wagon so that it has a hobbit on top and then the army will be complete. 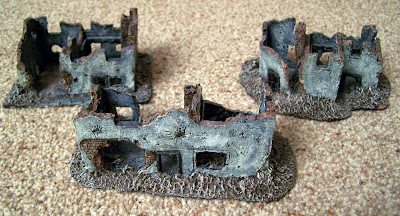 And I have also been doing some scratch-building of a fantasy village, using a cardboard tube, some plastic tubing and an old towelling sock. I'm really pleased how they turned out though I haven't quite decided who would live in such buildings. 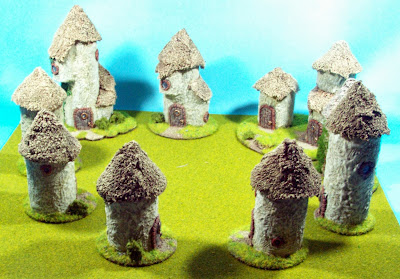 My lack of gaming (and blog updating) has also convinced me that I need to hone down my interests to restrict myself so that I paint, model and read less and game more. So I am soon going to be selling off all my 15mm scifi (figures and scenery) on eBay and focus all my attentions on fantasy gaming - 15mm for large battles with HoTT if I play my son (when he's back from uni) or Rally Round the King and/or Mayhem for solo gaming and 10mm for skirmishing and dungeon crawling using Warrior Heroes - and perhaps the occasional 10mm pulp game.


Of course, like many wargamers, I have made myself similar promises before but I hope that this time I will stick to it. Watch this space.