Well, two of them, actually.


You may remember that I made a whole village of fantasy buildings last year (see here). Well, I've come to the conclusion that I have got too many of them.

If I used them all on my normal size battlefield there would be no room for the troops to manoevre so I've decided to sell these two.

They are suitable for both 10mm and 15mm.

You'll find them on eBay here.

There and Back Again - a Wargamer's Tale 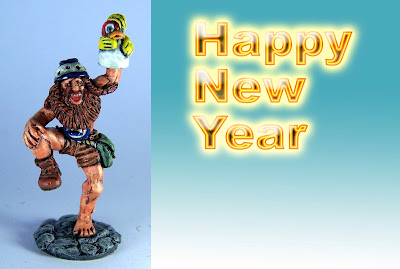 Well, 2013 was an interesting and quite active year for me.

Wargaming-wise I discovered Mayhem and actually managed a game which I thoroughly enjoyed. I almost got a second game in too but my son decided he wanted his bedroom back!

I also discovered Pulp Alley and managed a game of that too but decided that I am one of the few who didn't like it. I think it's the cards that did it for me. Dice - good, Cards - bad!

I managed to paint up and convert quite a few Pendraken 10mm figures (though still have plenty in my lead pile) and also did some 15mm stuff.

I bought a couple of hills after two attempts. The Royal Mail lost the first set but The Scene sorted the problem out brilliantly. And for birthday and Christmas I got some roads from Fat Franks which I haven't used yet but they look good.
And I sold off all my scifi figures and scenery.

And personally there was a lot to thank God for.
My wife landed a job which she absolutely loves to bits as a teaching assistant at one of our local schools - class TA with nursery in the morning and one-to-one with a child with Down's Syndrome in the afternoon.
Our eldest son continues training as an assistant manager at the local pub and is really flourishing.
Our second son received an award in his second year of university (3D Games Art) from heads of industry when in was competing with final year students.
Our third son managed to drum continuously for 71 hours to break the Guiness World Record for Team Drumming and has developed and grown in so many ways.
And our fourth son who is on the autistic spectrum succeeded in riding his bike without stabilisers and has also developed in so many ways.
And I feel that I had a pretty good year too.

And what does 2014 hold? Who knows?
Hopefully more time for gaming but life is already looking quite demanding so we'll have to see.
Wishing you a wonderful year.
Hugh
Posted by capthugeca at Wednesday, January 01, 2014 No comments: