Prepping for a Game of Mayhem 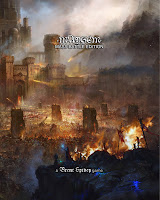 I've managed to paint and base enough generals and heroes for two armies for "Mayhem". And I've read through the rules several times and sent Brent Spivey, the writer, a number of questions to get some points clarified so I think that I'm ready to give the rules a go.

I quite like the idea from 2HW's Rally Round the King" of not having full control of the choice of units so I have created tables for the two armies creating a basic foundation for each of them of around 100 Crowns and then rolling dice for the other 100 crowns' worth.

Spring has sprung and it is time for campaigning to commence. In his private chapel Abbot Crispin the Third has been meditating upon the scriptures and interceding with his deity for guidance. With whom should he share the love of god this year?

In the "Gospel of St Justinian" (a very late addition to the scriptures and, no doubt, a likely source for another Dan Brown blockbuster) he reads, "I will draw my flock from other meadows" and he has an epiphany. That's it! His god doesn't just want humans to join his followers. His love is for everyone. And so Crispin proclaims a crusade to free all peoples from the tyranny of ignorance, starting with the orcs that wander the nearby Steppes of Hordaz.

His call is soon answered by two equally zealous monks, Brothers Germaline and Equile, who scour the parishes recruiting an army worthy of this holy quest - a mixture of professional warriors supported by masses of enthusiastic but unskilled pilgrims. And as the Abbot leads his army out they are joined by a host of angels - surely a sign that their god will bless this venture.

Meanwhile, on the Steppes of Hordaz, the Wargs growl uneasily, troubled by the smell of incense wafting through the air. The Orc pickets spot the mass of white cloth and silver helms and send news to their chieftain, "Muster the riders!"

That's the forces organised. I am probably going to have to wait until Wednesday to start the battle (and take the photographs).
Posted by capthugeca at Saturday, November 02, 2013