I am planning to use Two Hour Wargames' "5150 New Beginnings" rules for my main scifi stuff and their "After the Horseman" for post apocalytic stuff so will need afair amount of buildlings.

So far I have put together a few shanty town shacks:

I used the little bits of foam that you have to remove from protective foam trays to form a basic shape and then built the walls of the shacks around the foam using matchsticks, balsa and various plastic card and rod. The tarpaulin roofing is made from ordinary kitchen roll. In places this leaves the tarpaulin with a dimple texture but I can cope with that.

For more up-market buildings, I have used electrical boxes, hopefully to give the idea of prefabs which the owners have had the opportunity to customise (pimp?):-

The green one is meant to be a 'corner store' supplying a bit of everything and the orange one is the bar. 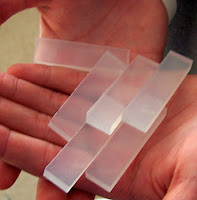 The customising has been mostly done with card, bits from various kits and other items from my bits box. The pub's sign is the end of a twizzle stick that you get with a cocktail. I've had it in my bits box for about fifteen years, knowing that it would come in handy one day.
Other parts have been cast using Oyumaru to make the moulds (exactly the same as Instant Mold but less than half the price - check on eBay!) and then using Milliput to make the copies. If you haven't used it give it a go. It is so simple and quite addictive. It gives you a new perspective on things as you look at the various textures,  protrudances and cavities as well as the item as a whole. For example the entrances of the buildings are copies from an old HO scale railway carriage.
I've got a police station and several prefab habitations on the workbench (if I had a workbench to have them on!)

And finally for the moment, I got these two off eBay recently for 99p. Hopefully, a bit of converting and a decent paintjob should make them look sufficiently realistic scifi.
Posted by capthugeca at Sunday, September 16, 2012