Arrival of the Recruits

Well, this morning the goodies arrived from Pendraken Miniatures. I only ordered them late last Thursday so well done, Dave, Leon and the other PM minions, for a speedy service yet again.

So here's what I've got to start the Froudian army off:-

The Gnomes with Swords and Spears come in two varieties (one with shield and one without) while there there is just one version of the Gnome with Lance (see below).

Like the Minotaurs I bought from Pendraken (see here) I plan to convert the Gnomes so that there is more variety. Obviously the poses of these small figures are far more compact than the Minotaurs so this is likely to be a bigger challenge but let's see how I get on. The head of the Gnome with Sword and no shield is nicely clear of clothing, weapons, etc so should give me the chance to copy its head with a bit of Oyumaru so that I can convert a few other figures into Gnomes.

I was thinking of mounting a Gnome on each of the owls but I am not sure that the owls are big enough to convincingly take the weight of them. I might have a rethink on that one.

I have my day off tomorrow so hopefully I'll have an hour or two to have a play. 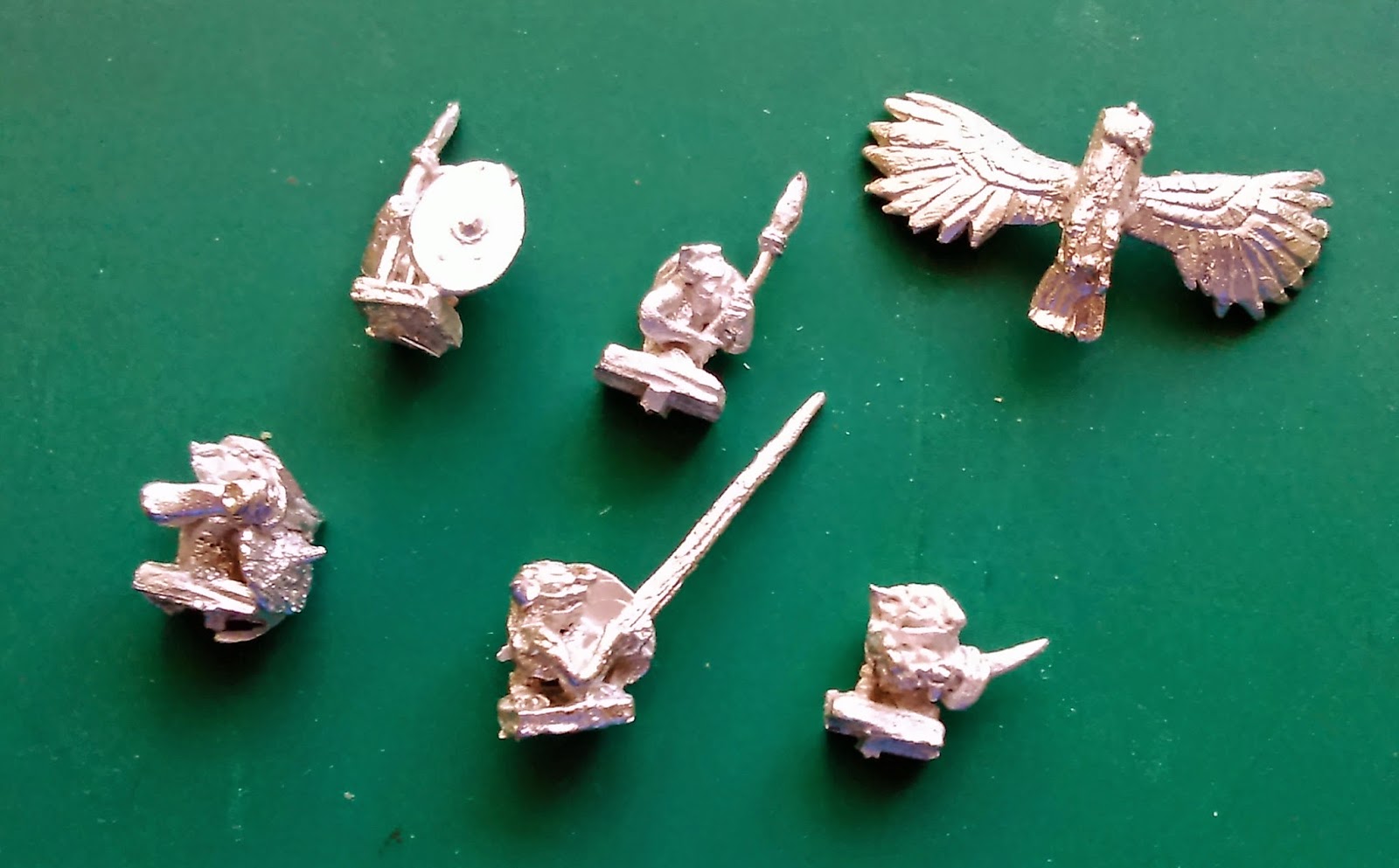 Posted by capthugeca at Thursday, January 15, 2015 No comments:

Last  year I sold off my Animal Farm and Pirate Armies (see here) as they didn't really fit in with my others. Not surprisingly I have been thinking about creating another army for a while but what to do? So many figures, so little time!

I quite fancy doing one based on Black Hat's "not-Ewoks" Tolero at some stage, especially now that they do them mounted too. But not at the moment.

I could do with another human army but am still contemplating what type to go for - barbarian, peasant revolt, aztec, caveman (with various creatures).

In the end my mind has been made up by the Pendraken painting competition 2015. I've always liked the art of Brian Froud and have recently been very inspired by DeafNala's "Last Hurrah Project" on the Lead Adventurers Forum. So I am going to give it a go to create a "Froudian" army using Pendraken's 10mm Gnomes as a basis. The competition is only open for a month so I am going to start small with a couple of units and if they work out I will go for it big time.

Posted by capthugeca at Thursday, January 08, 2015 No comments:

A Fight to the Death

As promised, here is the report of this morning's battle between a small band of mounted orcs accompanied by a giant and a slightly larger band of crusaders supported by a host of angels.

As my previous post explained, this was my son's first game of Mayhem and I was seriously rusty as I haven't played for over a year and didn't find the time to fully refresh myself of the rules.

Rolling command dice to decide who would start, the orcs won and ordered a general advance.
The mounted archers took the high ground supported by the giant. The mounted lancers advanced rather more hesitatingly. One unit of archers took a shot at the crusaders' crossbowmen but to no effect.

The crusaders took their turn and rolled a command die of 1 - that could have gone better! Clearly, led by the abbot and monk, the crusaders were seeking to follow the way of peace.

All units remained steady. One unit of crossbowmen returned fire against the mounted orc archers and did enough to cause them disorder.

Move Two
Having rallied the mounted archers, the orcs and giant continued to advance. This time both units of mounted archers fired at the crossbowmen but again with no success. My son started to question the d20 roll for a bow when crossbows have a d12.

This time I decided to use the default for command points rather than risk rolling another 1.

The abbot sent in his trusty hunting beagles to take out the the troublesome mounted archers and managed to disorder them.

Both my son and I were having dreadful luck with the dice rolls and that was going to continue throughout the battle.

Move Three
Again the mounted archers rallied and fired upon the crossbowmen throwing them into disorder. The  other archers fought off the hunting dogs and destroyed them with a 1.

The giant decided to charge into the waiting spearmen and also succeeded in causing disorder amongst them.

Things were looking dodgy for the crusaders, we thought.

Time to take a risk - the command die is rolled and fortunately I got a high enough number.

Both the crossbowmen and spearmen rallied and then both units of spearmen set upon the giant. The spearmen rolled a 1 and the giant rolled a 10, rewarding the giant with nine damage tokens in one fell swoop.

Meanwhile the crossbowmen took another shot at the mounted archers and finally wiped them out with a natural 1.
And that was all the crusaders could do that move. Initiating combat against a fear-inducing enemy drained a lot of command points. However, the giant was rendered all but useless with all those damage points. It would need 10 command points to activate or risk being wiped out by taking a damage roll.

The remaining orc archers charged into the rear of the flanking unit of spearmen but only managed to disorder them.
Meanwhile the lancers continued to advance but far too late for the giant.

The spearmen rallied and turned to face the archers.

The other spearmen attacked the giant and inflicted another damage token, causing the giant to roll. Having to get less than 13 on ten dice...
Yup, he was a gonna.

Finally the knights and angels got involved in the action.
The angels swept down upon the orc lancers and did absolutely nothing. The knights charged into the rear of the orc archers and wiped them out.

Now the crusaders were well and truly on top. The orcs were down to less than 50% of their strength and we were playing the breaking point rule would have to role a command dice to see if they would continue.
This time they passed.
Move Five
Fortunately for the orcs, they rolled a high command die score too and went into overdrive.
One unit of lancers took on the angels and wiped them out with a 1. [I really should have remembered to designate them as a horde - the same thing happened to them in my first game].
The other unit hit the spearmen and destroyed them; then the knights and wiped them out to and then hit the crossbowmen.
Now it was the crusaders in trouble again. Just one unit of crossbowmen left so the breaking point rule applied to them too.
The crusaders passed the test and the crossbowmen attacked the lancers and beat them.
Now it was just one unit each.
Move Six
Both armies passed their breaking point roles even with the increase in the number od dice.
The two remaining units squared up to each other and swapped slogs against each other. Firstly the lancers disordered the crossbowmen and then the crossbowmen rallied and disordered the lancers.
Then in Move Seven, having passed their third breaking point roll, the orc lancers attacked the crossbowmen but received a natural 1 against them and popped their clogs.
Game over, Man, game over.
And a good time was had by both of us. I think that we both loved the way the battle swung from one side to the other and back again.
Next time I will designate those angels correctly and I think that my son has worked out not to send in a giant without a bit of support.
And on that subject, it was the first time that we had used one of the "ready-made" monstrous creatures and I think both of us weren't entirely happy with its profile. I wonder why Mr Spivey decided to "pre-create" the three monstrous creatures, rather than offer factors to allow players to create their own monsters as they understand them as he has with all other troop types.
Any way, it looks like we'll be having another game soon
Posted by capthugeca at Friday, January 02, 2015 4 comments:

At Last Another Game (Whoopee!)

I was tempted to write a review of 2014 like so many fellow blogging wargamers have done but I realised that my post would be rather short.
It has been quite a year in family- and work-life with one regularly overspilling into the other even more than normal so very little painting has been done and no gaming.
But all being well, one of my sons and I will be having a game of Mayhem tomorrow.
It's his first Mayhem game and only my second (after a long break) so we're starting small and will probably make a few mistakes (Brent, feel free to correct us).
So without further ado, here are the two armies - Orc v Crusaders:-
THE ORCS
Orc General (15 crowns)
Leadership d10
MOV d8
CQ d12
BAR d12
General

Just a little skirmish - 200 crowns.
I'll try to get the photos and battle report up tomorrow.
Watch this space.
Posted by capthugeca at Thursday, January 01, 2015 No comments: