The End of the Journey

Close to the northern border, it looks as though the little band of heroes will reach safety or will they?

Move 9
Rodmar - more dice throwing- 2, 2 and 3. Reinforcements - two Orc Warriors appeared from the right flank. Monster Frenzy - all the Orcs homed in on the player characters. Even the Green Troll, though still too far away to be aware of them, managed to start travelling towards the heroes. Wandering Monster - yet another Orc Bruit appeared on the left flank. This is getting scary.

Move 10
Rodmar - 2 and 9. Monster Frenzy - the Orc Brute closed in on him and attacked but again got beaten back - 1Hp. Horde Activates - the groups of five and two Orcs moved closer still. With dice throwing like this they could still catch the heroes.

Aldun - 9, 12 and 20. That's better! He attacked thr Orc Brute but took a wound -1Hp. He tried again and again was hit but managed to block it with his shield at last. He used the last two activations for further attacks and at last struck home, killing the Orc Brute.

Jusius - 1. Oh, come on! Reinforcements - another 5 Orc Warriors appeared. This time on the northern edge but fortunately a little way to the right of the band.

Oswyn - 18. He breathed a sigh of relief and rushed off the board.

Aldun - 4, 17. Monster Activates - the Green Troll moved round the bush but was still too far from the heroes to cause a problem. Aldun moved off the board.

There you have it - the game over- and I haven't had as much fun on my own for a long, long time. There was real tension building as the game progressed and more enemy appeared. I think I was lucky that the Green Troll started off stuck in a corner and so didn't cause any problems. Perhaps that is why Andrea has a different way of deploying.

Next posting I'll do the Post Battle and Campaign Activities.

The Journey Through the Badlands Continues

So we left three of our heroes going like the clappers up the board while the fourth is being left behind single-handedly having fought off an Orc Brute.

Move 3
Oswyn - again trying to rejoin his friends, rolls 3 dice - 1, 11 and 12. Trap - fortunately in this scenario, this card only applies in the northern half of the board so he can ignore it. He moves twice and almost catches up with them.

Aldun - 3. Scenario Event - Oswyn spots something interesting on the next Orc Brute.

Jusius - 3. Ambush - an Orc Warrior springs out of a bush right beside Rodmar who rolls a 15, battering him with his staff. Don't mess with a druid with a hangover!

Rodmar - 17. Moves on muttering to himself.

Move 4
Oswyn - 4, 4 and 18. Monster Activates - the Orc Brute moves closer but doesn't reach the warband. Wandering Monster - another Orc Brute appears on the northern edge. Oswyn gets closer to the others.

Aldun - 9 and 17. He increases the distance between himself and Oswyn and reaches the next Orc Brute but doesn't have an activation left to fight him.

Rodmar - 11 and 14. Angry because of Aldun's recklessness and his hangover, he charges the Orc Brute and attacks him - 2. Whoops, he takes a hit from it.

Move 5
Aldun - 7 and 9. He tries to attack the Orc Brute but Loss of Balance and falls down. The Brute gets a Free Hack and inflicts 1Hp. He manages to stand up with his successful activation.

Rodmar - 2, 5 and 9. Reinforcements arrive - just one Orc Warrior appears at the southern edge. Ambush - another Orc Warrior jumps out at him from the bush and gets despatched just as quickly. He moves on, deciding to lay off the drink in future.

Jusius - 11 and 19. He moved to join Aldun and Rodmar and struck the Orc Brue with his dagger and scored a hit.


Move 6
Aldun in base contact with the Orc Brute decides to go in for the kill and throws three dice - 7, 16 and 16. Loaded - it has twice the amount of treasure on it. He attacks the Brute with the two activations and, aided by Rodmar's presence, gets two hits. The Brute is dead.

Jusius - 7 and 1. Manna Flux again. Who cares - he can't use any magic following his disaster in the first move. Things Could Get Worse - it's now raining. -2 for Oswyn's archery.

Oswyn - 20, 5 and 17. I decided to use the 20 critical activation bonus to cancel the 5 and Oswyn finally managed to join up with the others.

Move 7
Aldun - 3, 7 and 15. That'll Come In Handy - they spot a jewel worth 11Sp under the nearby bush but the Orc Brute behind the bush suddenly appears round the corner. Horde Activates - there were no hordes on the board and nothing that could form one. Aldun moved on.

Rodmar - 2, 5 and 7. Ambush - another Orc Warrior jumps out of the bush and attacks him but again Rodmar swats him with his staff. This is becoming a habit. Wandering Monster - another Orc Brute appears. Fortunately he arrives at the far side of the southern board edge well away from the warband. They're at Our Back - 5 Orc Warriors appear. Again they are some distance from the heroes.

Oswyn - 2, 11 and 19. Horde Activates - the 5 Orcs start their long journey towards their prey. Despite the rain, he takes two shots at the Orc Brute and hits he both times and kills him.

Move 8
Rodmar - 12, 14 and 18. He moved to the bush and picked up the jewel; then he searched the corpse for 4Sp and then moved on again. Escape seemed close hand.

Jusius - 1, 3 and 4. Oh dear! Horde Activates - those five Orcs moved closer. Loss of Balance - but he managed to make his DL throw. That's a Big One - the Orc Brute to their front has an extra 1Hp.

Oswyn - 2, 10 and 10. Things Could Get Worse. The rain stopped. Oswyn rushed forward to keep up with ohers.

I'll leave it there for this evening. The final installment should come tomorrow hopefully.
Posted by capthugeca at Friday, June 08, 2018 No comments:

Fun with Sellswords & Spellslingers or How Hard Can it be to Roll an Eight!?! 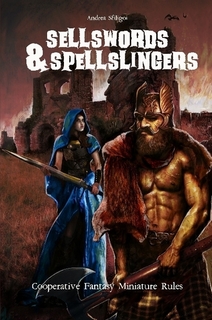 No, I haven't been abducted, imprisoned or otherwise hidden away. I've been busy painting up some of my lead mountain - both 10mm fantasy and 15mm scifi - and spending money on a variety of sets of rules.

And I may finally have found my Holy Grail for fantasy skirmish rules - Sellswords & Spellslingers by Ganesha Games. I have always appreciated Andrea Sfiligoi ideas but I think that he has really excelled himself with this set. I won't spend any time decribing them - there are several others who have already commented favourably on them. See, for example, John's thoughts, The Raft or Argonor.

But this morning I managed to have my first game, playing solo and will give a blow-by blow account which should give you a good idea of how it works. This is going to take more than one posting but here goes.

Like probably all wargamers, I had a little tinker with the rules but nothing too drastic.

The rules suggest a board of 36" by 36" with a normal move of 4" for 28mm figures and suggests that for 15mm and below, the board should be 60cms by 60cms and the numbers are given simply regarded as centimetres instead.  However, that would mean that a 28mm figure could theoretically traverse the board in nine moves while a 15mm figure would take fifteen moves. I, therefore, decided to say that 1" for 28mm figures is 1.5cms for 15mm figures.

Also random deployment is done by rolling d6 x d6 but, as other players have identified, this tends to lead to foes or terrain being placed centrally. Instead, as my board is 60cms x 60cms  I used a d6 to decide the tens and a d10 to decide the units for each axis.

Like others, I decided to plump for the first scenario in the rulebook - Through the Badlands - where the characters have to cross from one side of a rather bushy board to the other confronted initially only by one Green Troll and four Brute Orcs and the potential of a trap or two laid in the northern half of the board.

And the characters only needed to roll 8+ on 1-3 d20 activation dice apart from Rodmar who needed to throw 9+ due to a bad hangover following a heavy drinking session at the Duck and Dragon the night before.

I used the above method to randomely place the bushes and then the Troll (fortunately right in the top left corner) and four Orc Brutes (one right at the top centre, two in open ground in the northern half and one on the right flank behind a bush).

Move One
So I decided to move Aldun first and threw two dice - 5 and 20. I could have used the 20 (critical success) to cancel out the 5 but decided to risk it and drew the Monster Frenzy card - all foes move. So that was a good start! Fortunately none were within charge reach but they all got a little closer...all apart from the Troll who just wandered around. Aldun then moved on.

Oswyn - 1 and 13. Mana Flux - an equal chance to increase or reduce Jusius' chances at casting magic. I rolled a 5 so chances have improved by +2. Oswyn decided to shoot at the Orc Brute on the right flank and succeeded - 2 damage.

Jusius - 8, 8 ans 20. He decided to launch a fireball at the Orc Brute to well and truly finish him off so I rolled and got a 1 - a critical failure. Jusius can not cast magic for the rest of the scenario so that Mana Flux +2 came in handy! Now all put harmless, Jusius decided to use the rest of his activations to catch up with Aldun so that he had some protection.

Move 2
Oswyn - I decide to roll three to enable him to catch up with the others but 1, 3 and 19. Tread on a Scorpion - fortunatley he rolls above the necessary DL10 and so managed to squash the creature without being poisoned. Then Monster Attack - the Orc Brute charges Oswyn, who decides to have a go at an Opportunity Shot - 7 and misses! The Orc Brute is on him and attacks - 16. Thankfully Oswyn even with his little dagger manages to finish the wounded Brute off. He uses his successful roll to search the Brute and finds 9Sp.

Aldun - 8 and 20 and, ignoring the desperate combat going on behind him, decides to continue towards the horizon with two moves.

Well, that's enough for the first post. I'll get more of the report done later.
Posted by capthugeca at Friday, June 08, 2018 2 comments: